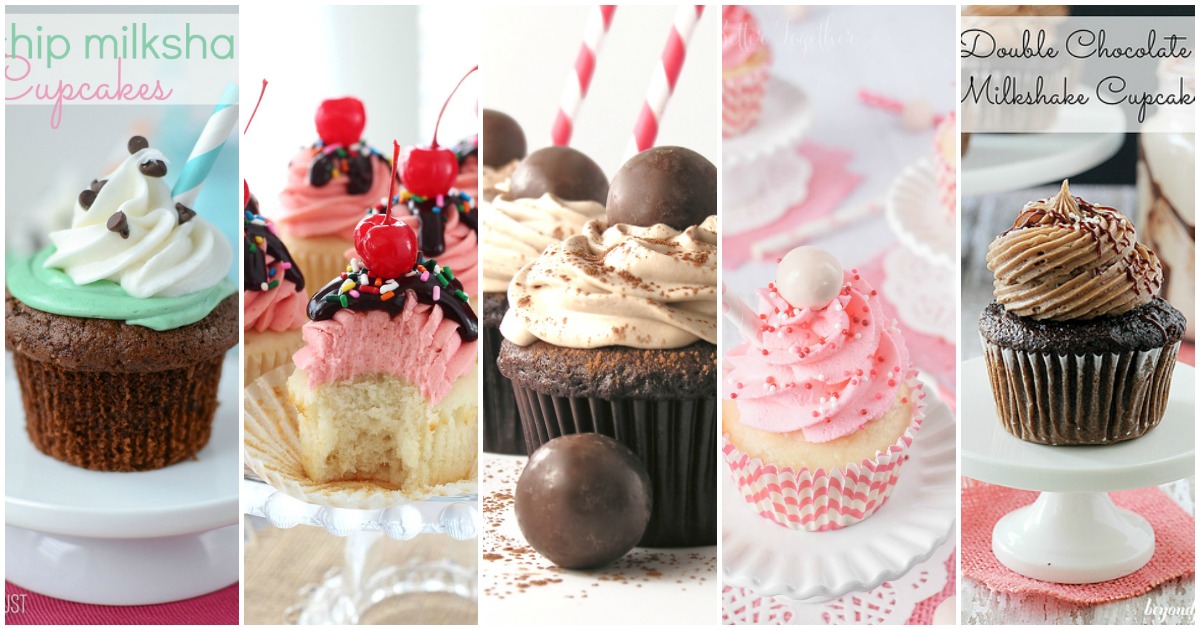 My Cupcakes Bring All the Boys to the Yard

These little bites of awesome are packed with the flavors of your favorite milkshakes without the brain freeze!  From Mint Chocolate Chip, to Strawberry Sundae, to Malted, to Double-Chocolate… you are sure to find a recipe to please everyone! This recipe comes to us courtesy of Dorothy from Crazy for Crust who says:

“First of all, the cupcake itself is a doctored cake mix. I used the water and eggs called for on the box, but instead of using water, I used melted mint chip ice cream. Oh, yes I did.

Grab the full recipe and get to baking by heading over to: This recipe comes from Life, Love and Sugar Blog writer, Lindsay, who says:

“… they are kind of adorable and happy, but they are also darn tasty. The cupcake is super moist and made using my favorite vanilla cupcake recipe.

The strawberry icing is made with the hubs’ favorite – strawberry Nesquick. He puts so much of the powder in his milk that it’s practically a thick strawberry milkshake. I have to admit – it’s tasty.“

Get the recipe by heading over to: This recipe comes from Ruthanne at Easy Baked.  She says:

“Dark chocolate cupcakes topped with the creamiest malt frosting ever. Like a malted milkshake minus the cup!

I have an addiction to chocolate malts. Not chocolate shakes, just malts. The creamy, chocolatey kind that you drink through a striped straw at the pool. My mom makes the best chocolate malts ever. They are really simple to make, but there’s just something about her leaning out of the patio door and asking, “Anyone want a malt?” that makes me smile. It’s one of our summer traditions.”

Get the recipe by heading over to:
Malted Milkshake Cupcakes This recipe comes to us courtesy of Rebecca from Sugar and Soul who says:

“I decided to do a simple vanilla based cupcake with a little malt powder thrown in for extra milk shakey-ness. Top it off with a strawberry milk whipped cream frosting and a whopper and you’ve got some of the cutest little cupcakes around. Oh, but don’t forget the straw! These cupcakes don’t have any oil or butter in them, it’s sour cream that keeps them light and moist. They have a light flavor, not too overwhelming, but just enough to make you reminisce about those childhood days with a glass of thick pink strawberry goodness!“

Grab the full recipe and get to baking by heading over to: This recipe comes from Beyond Frosting Blog writer, Julianne, who says:

“I only recently found out that Ghirardelli offered Ground Cocoa in both Unsweetened and Sweet Ground Cocoa. The Ground Cocoa is the perfect chocolate flavor for cooking, brownies and even frosting. Today, I am using the Sweet Ground Cocoa for this Chocolate Milkshake Frosting. It’s chocolatety, a little griddy (like Cocoa) and slightly malted. I added some vanilla malt powder to the frosting for the added “milkshake” taste. I also tend to use heavy whipping cream in my frostings which add a smooth and creamy texture. I also whip it at high speeds for 30 seconds at a time to introduce some air into the frosting.“

Get the recipe by heading over to: